You are here: Home / Collaborations / Misa Tariro: Mass of Hope 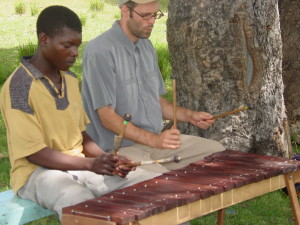 Work began on this massive undertaking in 2001, shortly after composer Randy McIntosh returned from Zimbabwe.  While there, Randy attended ceremonies and witnessed how villages use music to create and sustain community. The music Randy now writes is inspired by what he experienced in Zimbabwe.

In composing his Misa Tariro, Randy used Shona poetry and proverbs combined with Latin and Greek texts from the ancient form of the mass.  The marimba ensemble provides the energetic pulse in this amazing composition. Randy has truly captured the responsive flow of spirit in the music and rituals he witnessed in Zimbabwe. 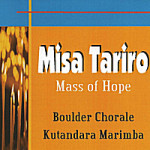 Listen to Misa Tariro on cdbaby.com

Randy says, “Misa Tariro is a cross-cultural celebration of the power of spiritual music. The singers use ancient Latin and Greek texts in combination with Shona poems and proverbs from the 2,000-year-old Zimbabwean tradition. The marimbas provide the energetic pulse and soulful heartbeat.”

In 2012, Dr. Michael Todd Krueger, conductor of the Larimer and Littleton Chorales said, “Working on Misa Tariro is a delightful challenge. The polyrhythmic performance is dramatic both musically and visually. The primary inspiration for this work comes from the Shona people — yet there is the familiar structure of a traditional mass, from the Kyrie to the Agnus Dei. Once we put it together, it is unlikely that anyone in the audience will still be seated at the end of the concert.” 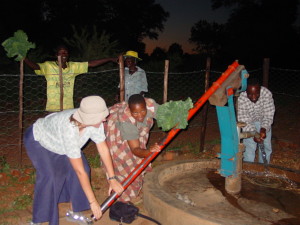 Randy stresses, “Beyond the wonderful musical form, beyond the energetic zeal of the instruments, beyond my hopes to widen the horizons of musical capabilities for musicians, singers and audiences alike, I have to stress that the ultimate inspiration for this work lies in the impressive resiliency of the Zimbabwean peoples in the face of unbelievable hardships.”

“The joy of my composition is the artistic expression of the joy of the Zimbabwean — and human — spirit. That is why I have named it ‘Misa Tariro: the Mass of Hope.'”

We are grateful to Boulder Arts Commission and Boulder County Arts Alliance’s Neodata Endowment for their support.

We at Kutandara acknowledge with respect (as non-Native people) that the land on which we stand, live, learn, teach, and perform is the traditional territory of the Ute, Cheyenne, and Arapaho Peoples. We also recognize the 48 contemporary tribal nations that are historically tied to the lands that make up the state of Colorado. We honor Elders past, present, and future, and those who have … END_OF_DOCUMENT_TOKEN_TO_BE_REPLACED

We have something for everyone! We offer on-going marimba, drumming, and mbira classes for kids, teens, and adults, as well as custom one-time music … END_OF_DOCUMENT_TOKEN_TO_BE_REPLACED

We are BACK! And excited to play some live, in-person, outdoor shows! Can't make it to a scheduled event?  Subscribe to and explore Kutandara's … END_OF_DOCUMENT_TOKEN_TO_BE_REPLACED

We collaborate with individuals, groups, and nonprofit organizations at every opportunity to bring special projects to our community and beyond. This … END_OF_DOCUMENT_TOKEN_TO_BE_REPLACED